Apple today announced a second 2020 event, which is set to be held on Tuesday, October 13 at 10:00 a.m. on the Apple Park campus in Cupertino, California. As with Apple’s September event focusing on the new iPad and Apple Watches, the October event will be digital only, with Apple likely providing pre-taped segments for each new product that will be announced. 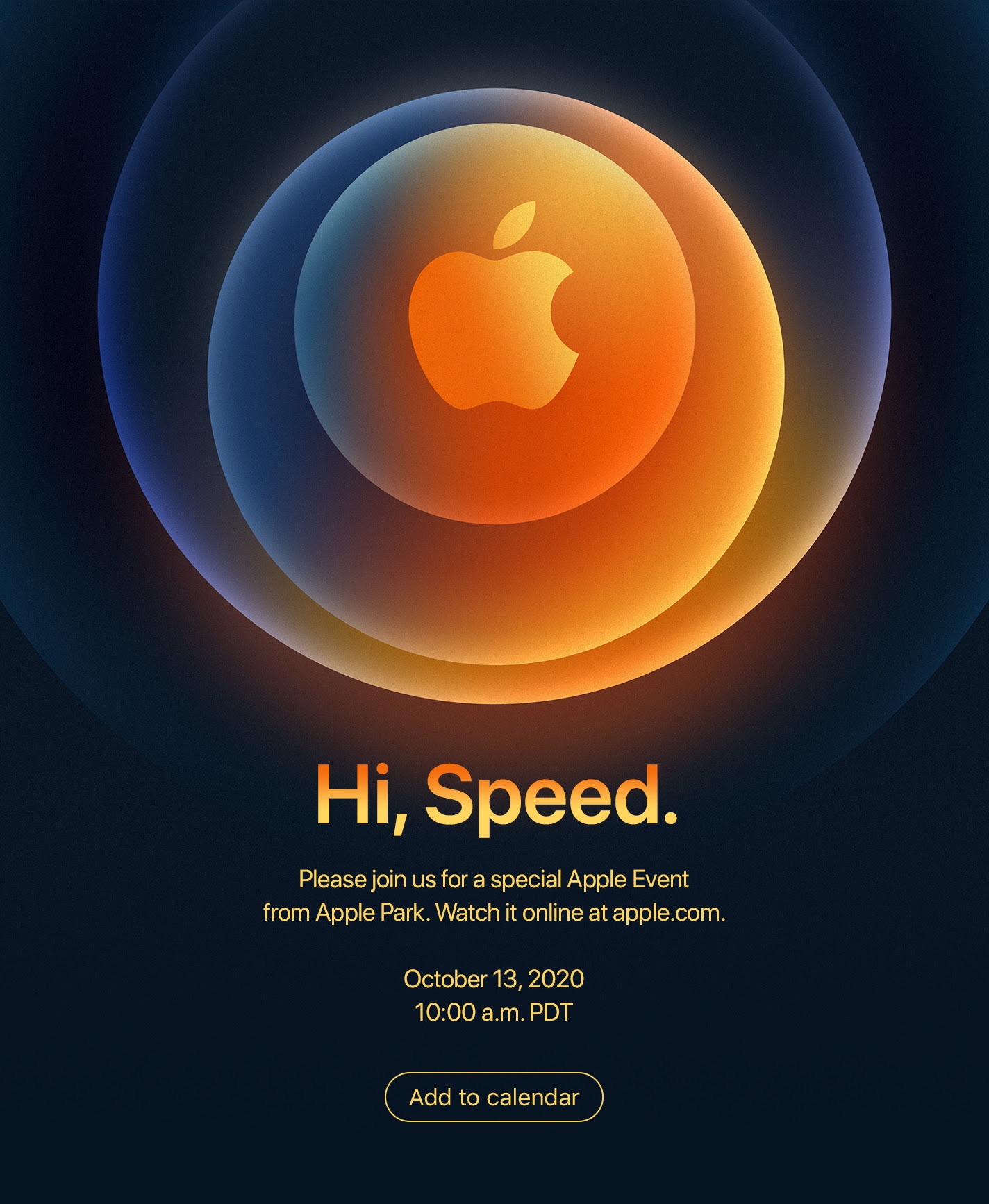 Since the new ‌iPad‌ Air, eighth-generation ‌iPad‌, and Apple Watch Series 6 have already been announced, the October event is expected to be Apple’s iPhone-centric event with Apple introducing the new iPhone 12 lineup.

We’re expecting four iPhones in three sizes in 2020. The ‌iPhone 12‌, which will be the more affordable iPhone model available, will come in 5.4 and 6.1-inch size options. The 5.4-inch ‌iPhone‌ will be the smallest ‌iPhone‌ that Apple has released in years, and rumors suggest it could even be called the "‌iPhone 12‌ mini." 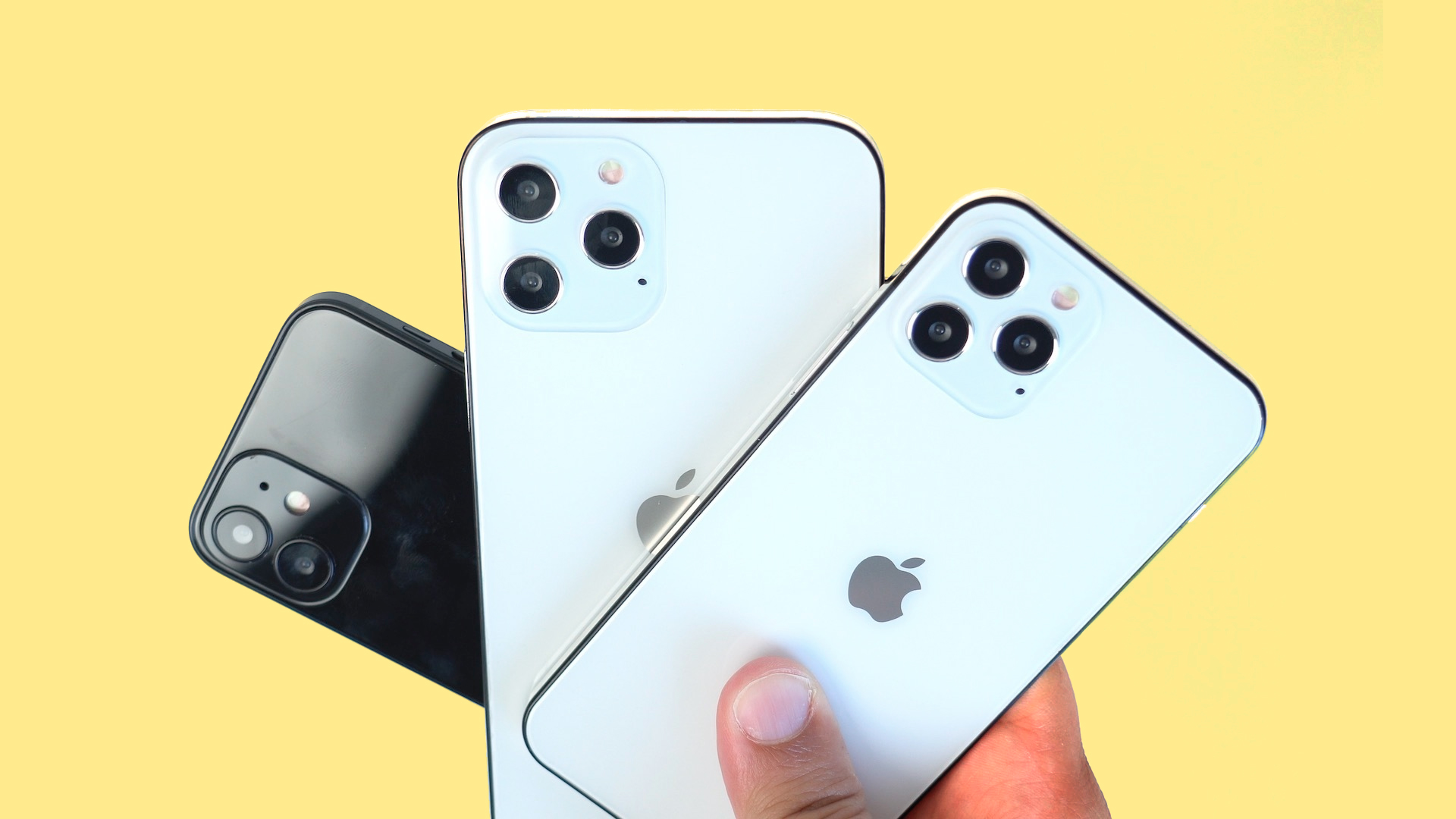 The higher-end flagship ‌iPhone‌ models, expected to be called the ‌iPhone 12‌ Pro and ‌iPhone 12‌ Pro Max, will come in 6.1 and 6.7-inch size options, with the 6.7-inch ‌iPhone‌ featuring the largest display size that Apple has introduced to date. 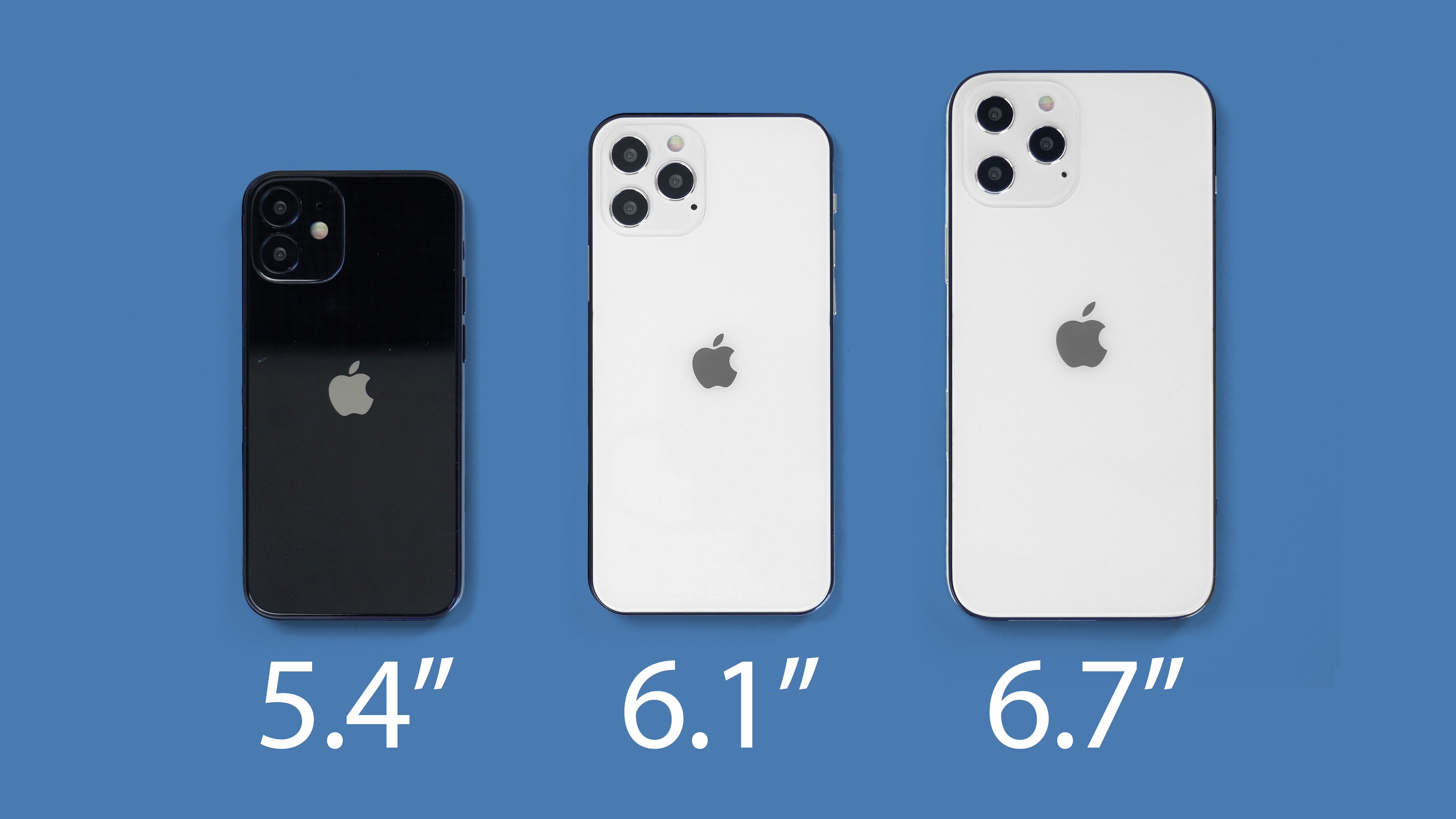 All four iPhones will feature edge-to-edge OLED displays with Face ID functionality and front-facing TrueDepth cameras. Despite some early rumors of smaller notches, it doesn’t look like the notch is shrinking on most models, but we can expect a proportional notch on the smallest 5.4-inch model. This will be the first time that Apple has used OLED display technology across the ‌iPhone‌ lineup. 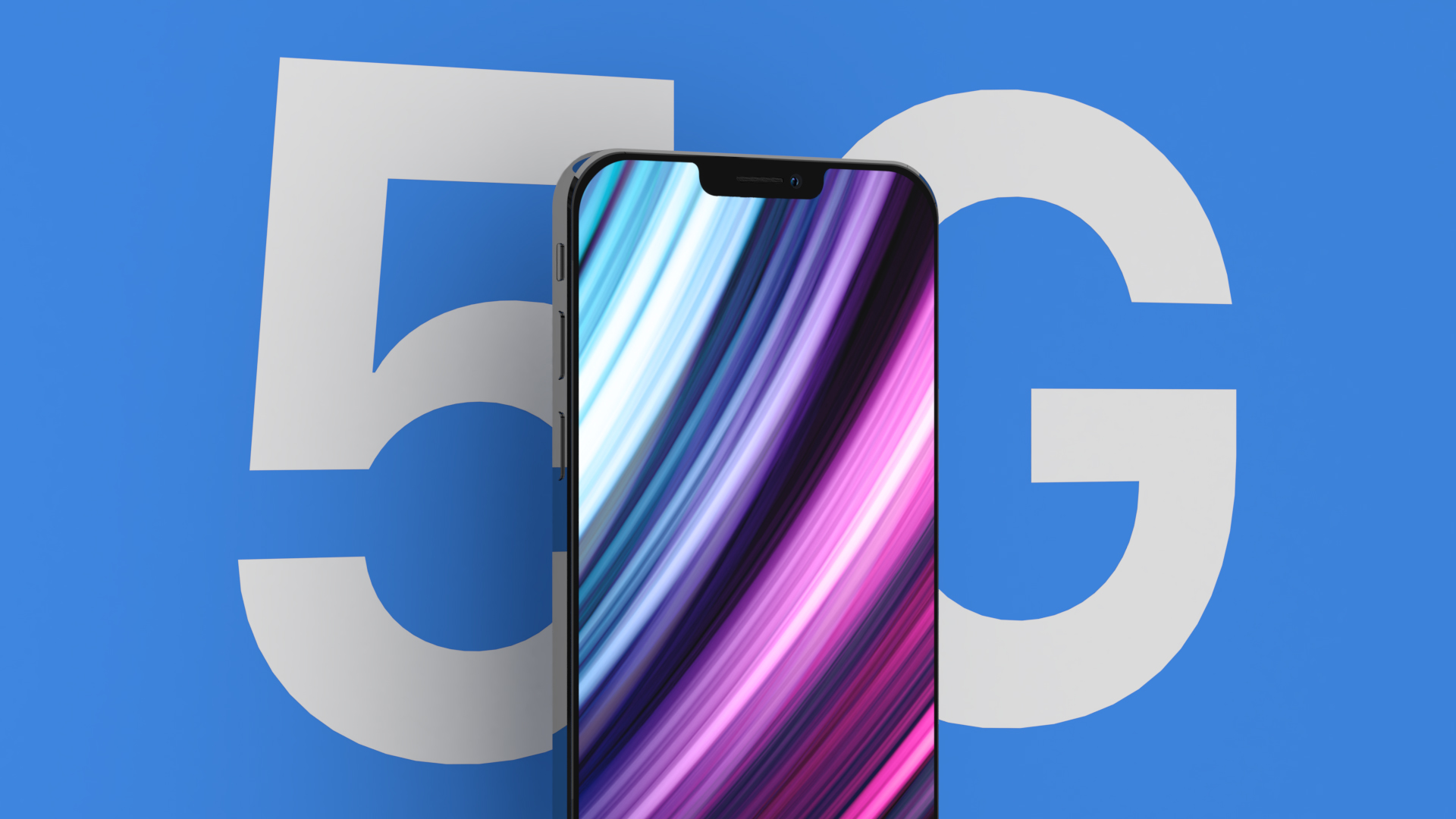 Apple is also expected to introduce 5G support for all of the ‌iPhone 12‌ models, though the fastest mmWave 5G could potentially be limited to the higher end models while more affordable models get Sub-6GHz 5G. Sub-6Ghz 5G is the 5G that’s expected to be used in most places (with mmWave coming to urban areas) and you can read more about the differences in our guide. 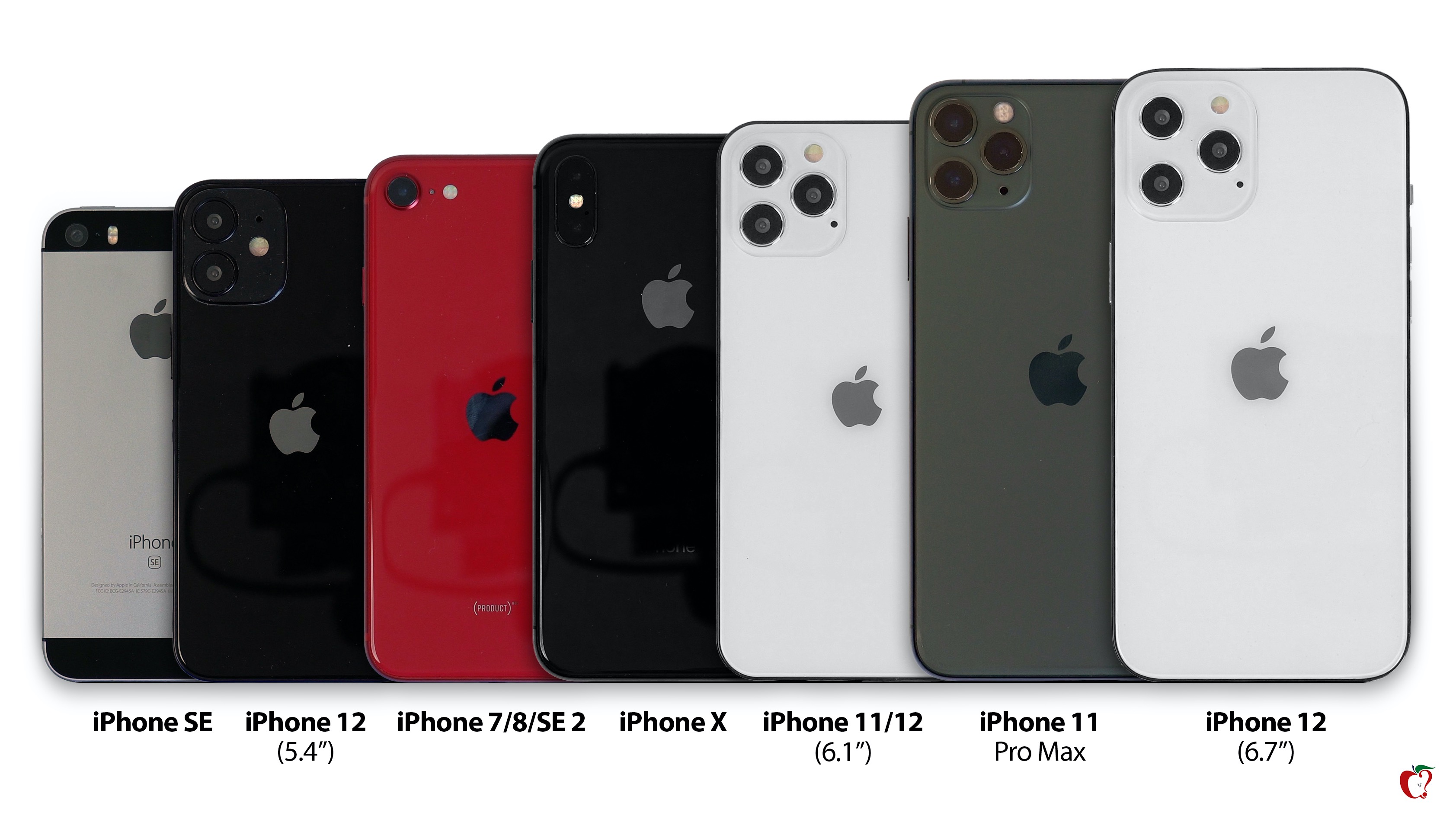 The 2020 ‌iPhone‌ lineup will feature a redesign with the iPhones adopting an ‌iPad‌ Pro-style look that does away with the rounded edges that have been used since the ‌iPhone‌ 6 in favor of more squared, flat edges. 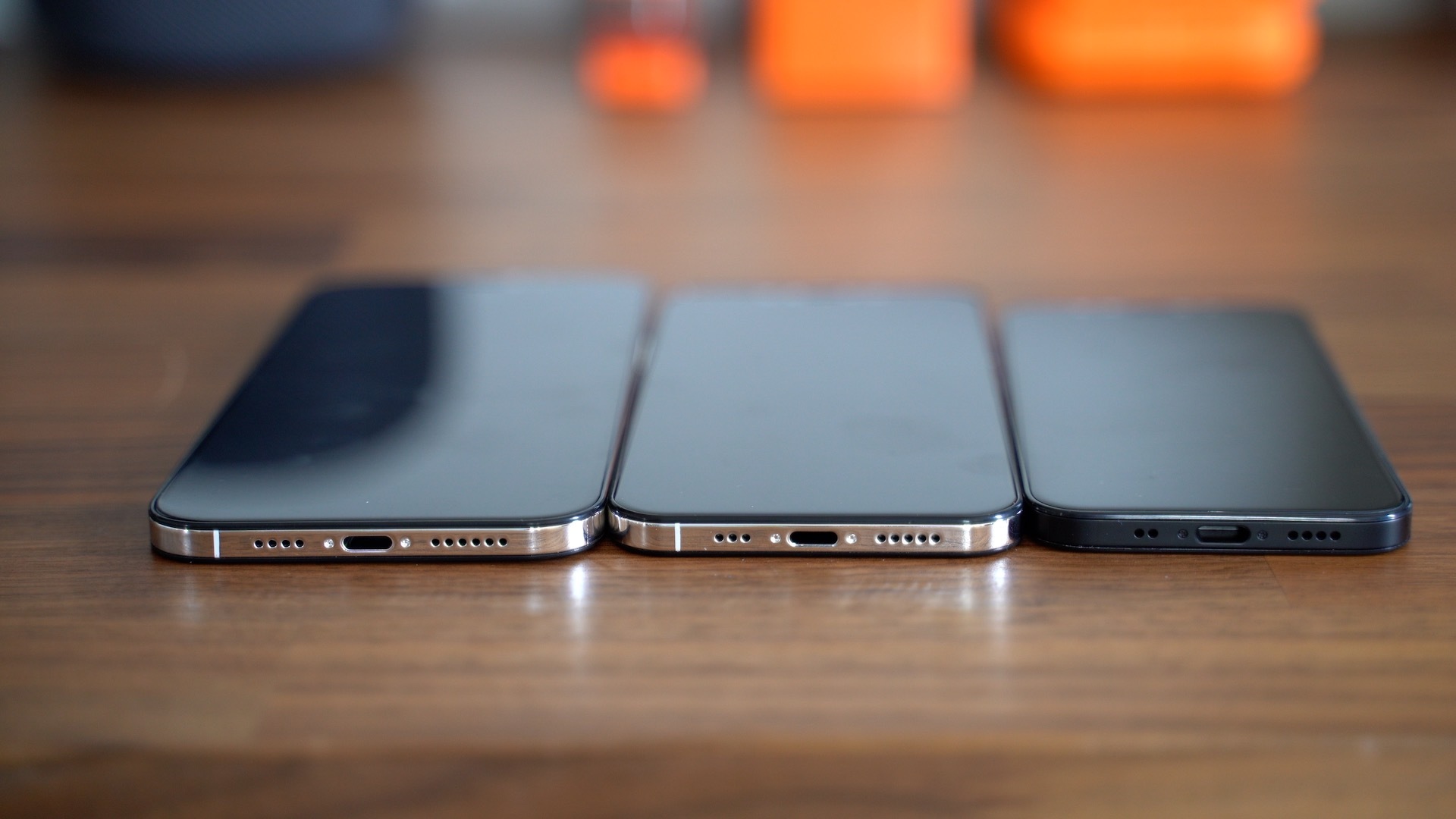 New camera technology is expected, with the high-end Pro ‌iPhone‌ models expected to gain LiDAR Scanners similar to the LiDAR Scanner introduced in the iPad Pro. All of the new iPhones will use the faster 5-nanometer A14 chips that Apple first introduced in the 2020 ‌iPad‌ Air, which should bring solid performance and efficiency improvements.

Because 5G technology is expensive, Apple is planning to eliminate the power adapter and earbuds that traditionally come with an ‌iPhone‌, instead offering a separate power adapter for purchase. A braided Lightning to USB-C cable could be included, however, and the power adapter rumor has been all but confirmed by the Series 6 Apple Watches, which were also shipped without a power adapter. 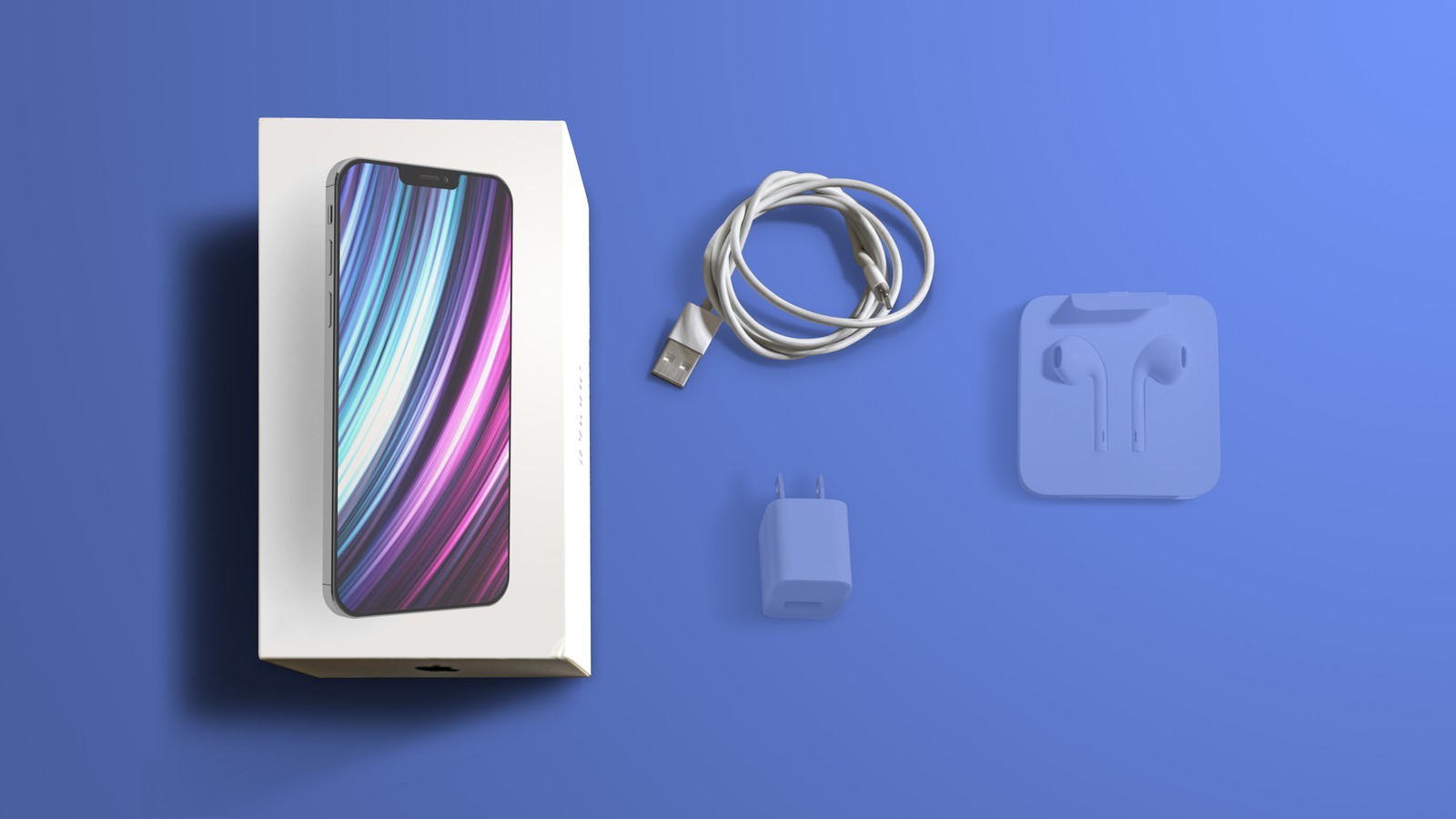 Apple has stuck to September events and releases for new iPhones for years now, but the global health pandemic delayed the launch of new iPhones, and given the delay, Apple also decided to delay its traditional September event. Apple in July confirmed that this year’s models would launch "a few weeks later" than the normal September timeframe.

Rumors suggest that the first ‌iPhone 12‌ models will see an October launch, perhaps not too long after the event is held, but some of the ‌iPhone‌ models, such as the ‌iPhone 12‌ Pro Max, could be delayed even longer. We may not see the availability of the full ‌iPhone 12‌ lineup until November.

Read more about the ‌iPhone 12‌ in our dedicated iPhone 12 roundup.

Apple is working on high-end over-ear headphones that are a part of the AirPods family, offering an over-ear alternative to the ‌AirPods‌ and the AirPods Pro. Rumors suggest the AirPods Studio will cost $349 and will offer Active Noise Cancellation and a retro-style design. 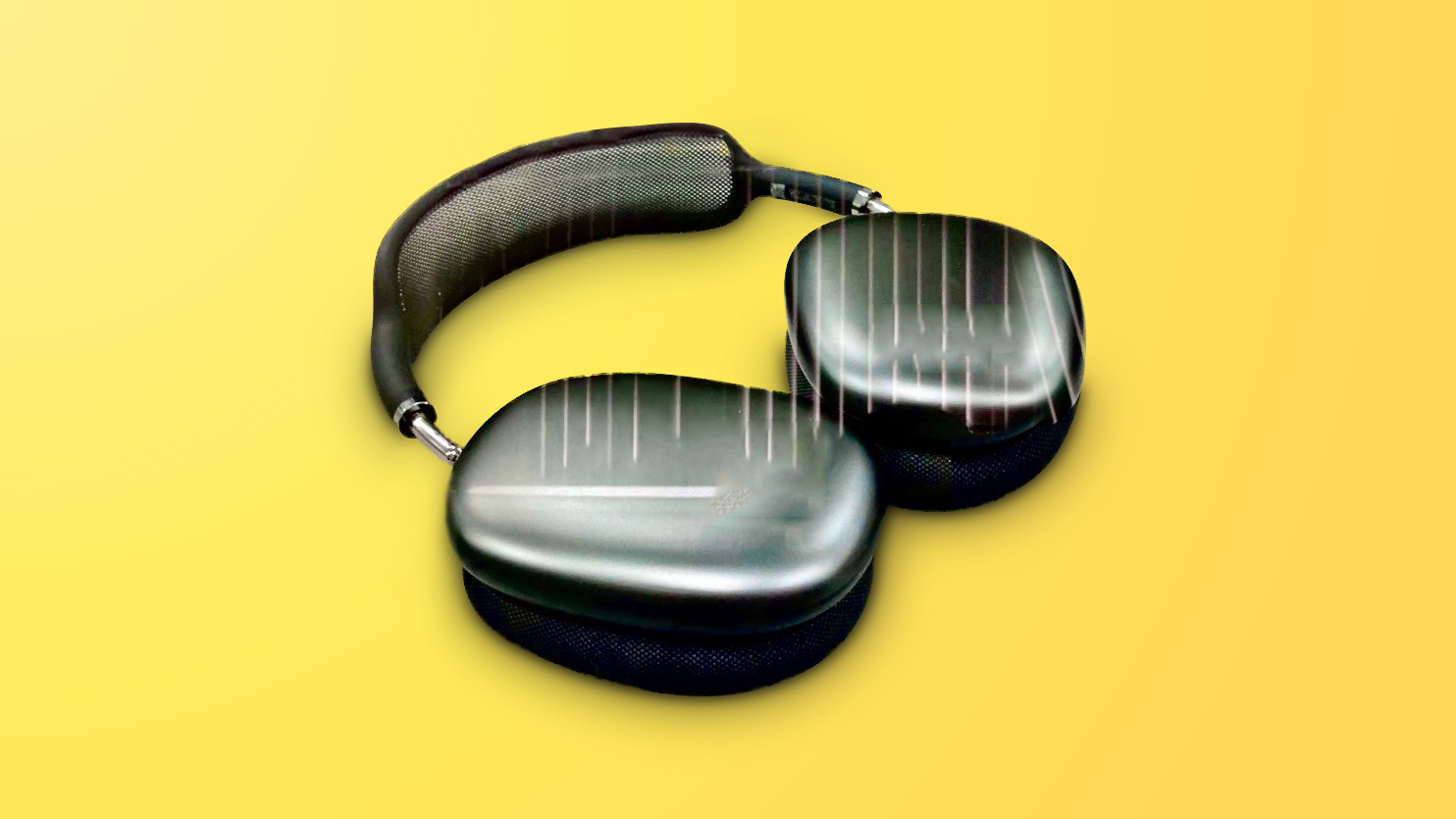 ‌AirPods Studio‌ are expected before the end of the year, so Apple’s October event alongside new iPhones would be an ideal time for Apple to introduce them.

AirTags are Apple’s long-rumored Bluetooth trackers that can attach to items like wallets and keys, letting them be tracked right in the Find My app alongside iPhones, iPads, and Macs. We’ve been expecting ‌AirTags‌ for quite some time now and we could finally see them in October. 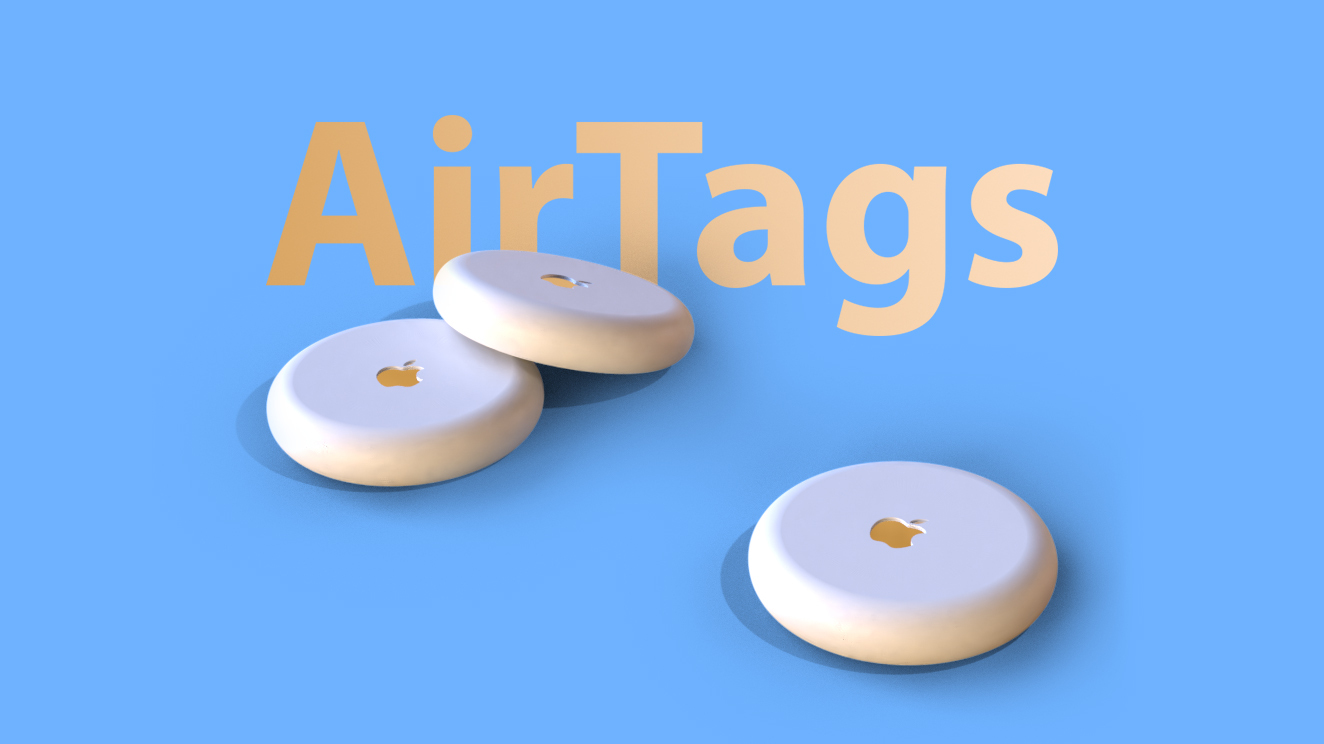 There’s supposed to be a smaller, less expensive HomePod in the works to accompany the existing ‌HomePod‌, and rumors indicate that it’s coming before the end of the year. 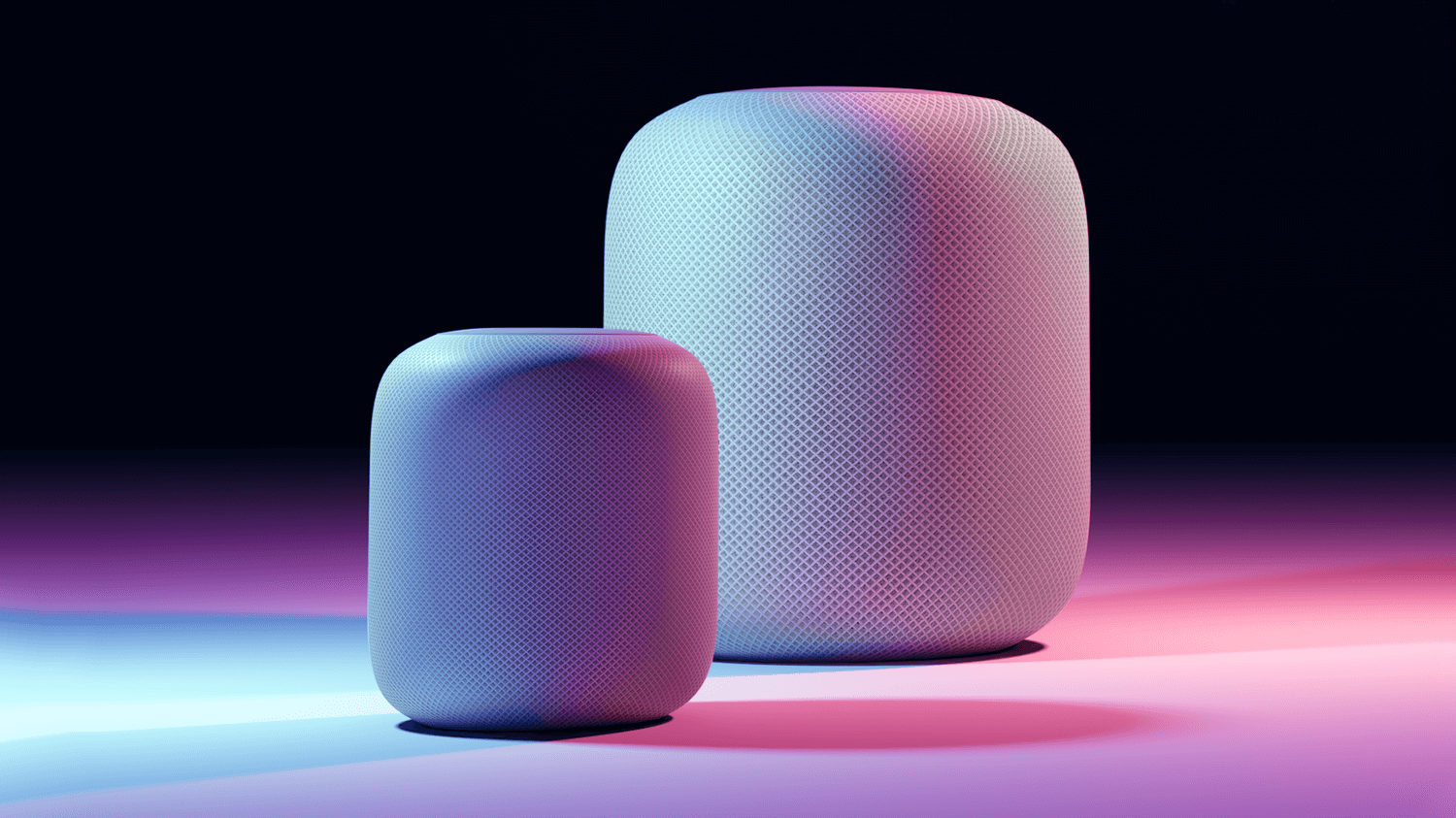 We’re expecting the first Arm-based Macs this year, which could come in the form of a refreshed MacBook Air and a redesigned 23 or 24-inch iMac. Most Arm-based Mac rumors suggest a launch later in the year, so there’s no confirmation that we’re going to see them at the October event.

Apple plans to stream the fall ‌‌iPhone‌‌ event live on its Events website, on YouTube, and on the Apple TV when it kicks off at 10:00 a.m. Pacific Time. For those unable to watch, MacRumors will be providing full event coverage both on MacRumors.com and through the MacRumorsLive Twitter account.

Apple’s Events website, when viewed on an ‌iPhone‌, includes a tappable augmented reality image that features an animated logo for the event that expands from a series of concentric circles into 3D spheres with the October 13 date image.

Apple has also shared a placeholder for its YouTube livestream on YouTube, so those who plan to watch that way can set a reminder.

Discuss this article in our forums